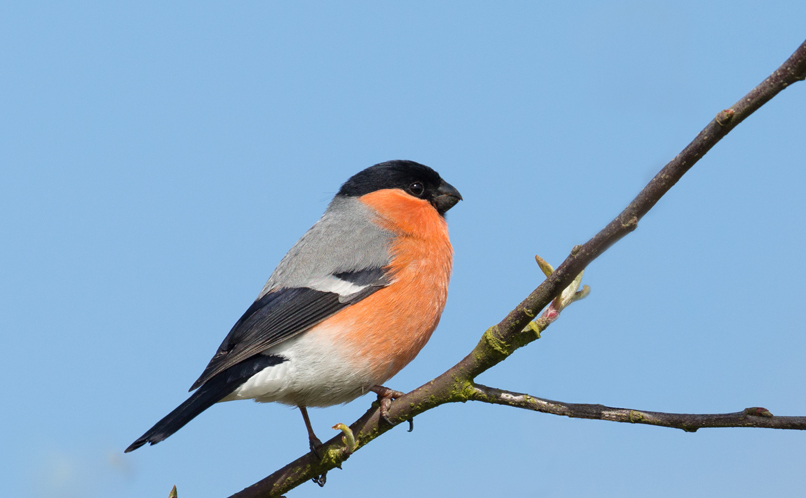 The bullfinch is a red chested little beauty that loves a fruity treat. The bullfinch’s taste for fruit, as well as seeds, has seen it become labelled as a pest for many in agriculture. Because of its sad decline, the bullfinch has been given Amber status by the RSPB, in a bid to protect its long term survival.

Stout, with a black face and head, along with a mix of blue-black and black tails and wings, the male bullfinch also has bright red and even pink underparts; making it very striking indeed. The female is less bright in colour, with both sexes sharing white across the wingbar.

The bullfinch is a shy creature, so though you may seldom see them, you will be able to hear the soft, low whistle, that can only really be described as melancholy.

For many, getting the bullfinch to visit a garden can be a challenge indeed. But if you live in a smaller garden, offer fruit or have fruit trees, you may be in luck. The bullfinch feeds mainly on seeds in the spring, but will take insects too.

The bullfinch breeds from May to August, and will nest in thick scrubland. Expect to see two, or even three broods in a single season, which for the bullfinch is between May and August. The 3-6 eggs they lay are pale blue with black spots and will incubate for 12-14 days. The young then fledge after 15-17 days.

The chaffinch shares many of the same identifiers, so look out for the black on bullfinch’s head.

Perfect for the Bullfinch...