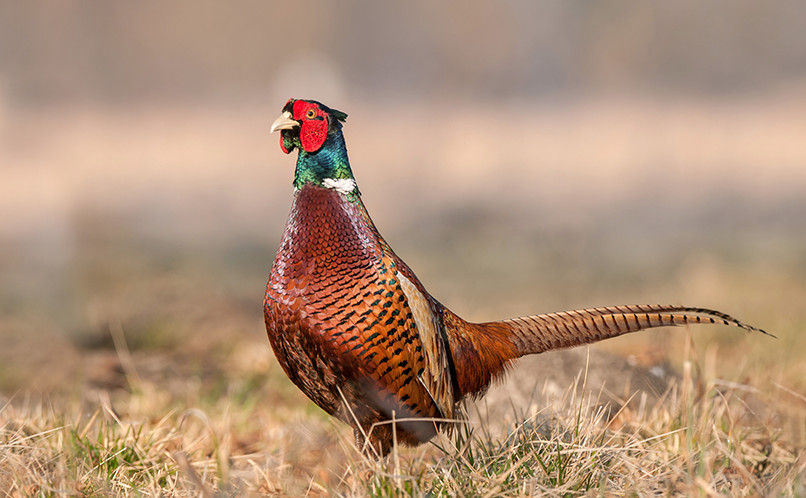 This large game bird was originally introduced to the European countryside from Asia centuries ago, but is now a common sight in woodland, farmland, parks, and large gardens. They tend to be hunted for shooting - as many now live outside of breeding pens, they can often be road casualties. Pheasants run from danger when alarmed, keeping close to the ground. If they're approached too closely, pheasants will burst into the air with a startling clatter of wings, before flying or gliding to safety.

Males are the more striking, with bright red wattles around the eyes, a blue-green neck and crown, with a white neck ring, ruddy brown plumage with horizontal 'scale'-like markings, and a long tail with dark bars on it. Females are mottled pale brown and black.

Pheasants eat a wide variety of grain, shoots, insects, and seeds. If you want to attract pheasants to your garden, opt for an all seasons seed mix.

The hen pheasant will nest in shallow hollow in the ground, lined with grass and leaves, generally under a hedge or among tall grass. The male pheasant will typically have a harem of several females during the spring breeding season, and will defend his territory from rival males. Each hen pheasant will produce roughly 12 eggs over a two to three week period, incubating them alone. Their eggs are olive-brown, smooth, and non-glossy.

While pheasants are capable of flying short distances, they prefer to run along the ground. They tend to only "flush" into the air when spooked.

The male's plumage and red wattle make it very distinctive, but the less assuming female pheasant may occasionally be mistaken for a grouse if seen from a distance.

Perfect for the Pheasant...