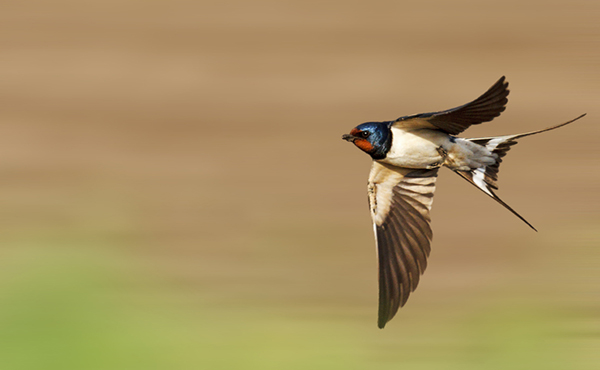 Much folklore surrounds swallows, and it is still believed that seeing the first swallow of the year is a good omen. However, whether you're superstitious or not, you know that summer has truly arrived when you catch your first glimpse of a swallow whizzing through the air.

Sexes are similar and are characterised by their long, forked tail streamers, glossy blue-black body, white underparts and a rich red forehead and throat. Juvenile swallows are duller in colour and lack all red markings.

Mainly insectivorous, they feed on the wing by catching insects during flight. They particularly favour larger insects including bluebottles and horseflies.

Famous for building their nests in outhouses, barns and buildings with beams, swallows will often reuse old nests year after year to raise their young. Incubating duties are performed by the female bird, and the newly hatched young are fed by both parents.

Before migration was fully understood, it was believed that swallows spend the colder months buried in the mud of ponds and lakes.

Swallows are often mistaken with swifts, largely because of their long tails and similar nesting habits. However, swifts are noticeably larger and, unlike swallows, they do not fold their wings whilst in flight.

Perfect for the Swallow...