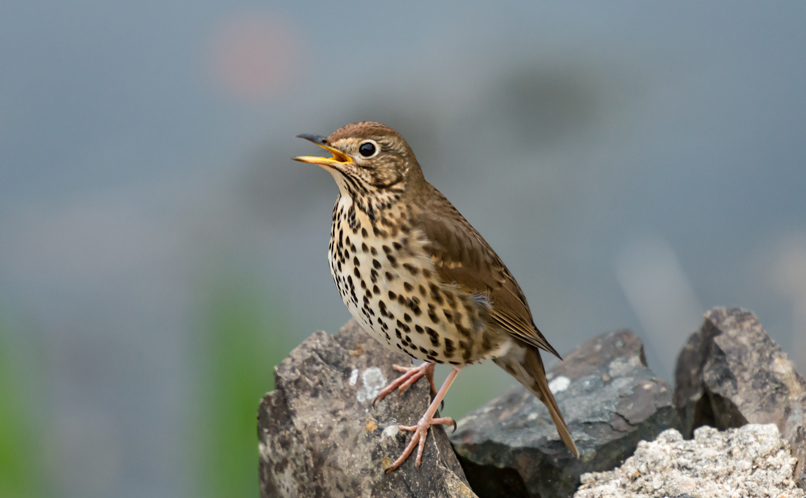 Sadly, the song thrush has seen a rapid, and somewhat unexplained decline in recent years, meaning the RSPB has assigned it red status. Until recently, the song thrush would not only herald the start of spring for many, but would also be one of the most common garden visitors. Once they migrate to the warmer climes of Spain and France, their place is taken by other birds from the Low Countries.

A very neat looking bird, with dark brown plumage and small spots near the breast and throat. The head and the upper parts of the song thrush are a chocolate brown with the underparts white, getting more yellow at the breast.

A distinctive song that is deeper than the blackbird calls in the beginning of spring, and consists of short phrases that are often repeated by groups of two or three.

The song thrush loves to feed on lawns, where it can pull up worms. Though the song thrush’s diet is mainly based on insects, they will eat the odd piece of hedgerow fruit, and very occasionally a seed. Trying to rid your garden of slugs? The song thrush can do that for you, no problem.

Though numbers have declined, it isn’t due to any complicated breeding habits, like those of the dunnock for example. Lays 3-5 pale sky-blue eggs, which incubate for 12-14 days, with young that fledge after a period of around 12-15 days. Often raises two and sometimes three broods.

As well as eating insects and worms, the song thrush will also smash snails on a hard surface, and eat the “contents” inside the shell.

Perfect for the Song Thrush...