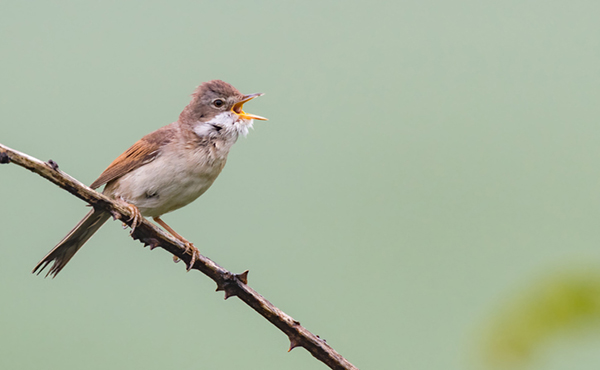 A summer visitor to the UK, Whitethroats arrive in the country from mid to late April after spending their winter in the Sahel, just south of the Sahara Desert in Africa.

Their main distinguishing feature is their namesake white throat, and males have a contrasting grey crown. Both sexes are similar in appearance with rusty grey/brown topsides and tinted pale underparts.

The Whitethroat has a fairly inconsistent diet that varies throughout the year depending on their circumstances. During summer they have a tendency to favour insects, while during migration and on their African winter grounds they have a preference for berries.

Breeding throughout Europe and Western Asia, the Whitethroat builds its nest in low shrubs and brambles where the female will lay a clutch of 3-7 eggs.

The average lifespan of a Whitehthroat is about 2 years, however in August 2009 a Whitethroat was caught that had been ringed in 2002 - making it a whopping 7 years old! As if that wasn't impressive enough, that little bird would have migrated a total of 78,855km in its lifetime!

Whitethroats are similar in both size and plumage to the House Sparrow, however they can be differentiated by their namesake white throat and their song.

Perfect for the Whitethroat...