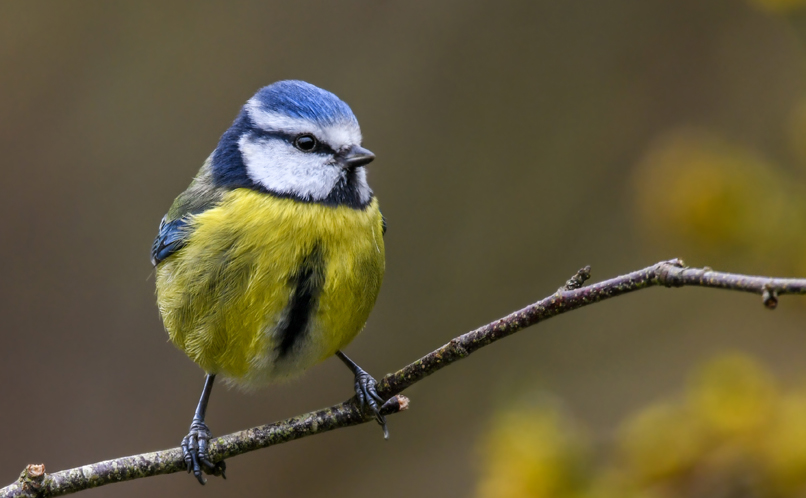 An acrobatic visitor to gardens throughout the year, this lovely little tit is ubiquitous in gardens across the UK countryside. Whether travelling in loose flocks in the winter, or as individuals competing for food in the summer, they simply love peanuts from feeders, and love a good bird bath too!

As is often the case in the bird kingdom, it is the male who is the flashier of the sexes. Both have the signature blue and yellow plumage, with the females’ being slightly duller. Though they are known and named, by their blue and yellow colouring, a lot of the blue tit is in fact a dull green, with the better known identifiers being confined to the crown, wings and tail.

Just like other tits, you’ll hear a variety of calls, from everyday bird chattering, to a more ringing song.

Like most smaller birds, the blue tit loves insects and spiders, but will come to your garden for peanuts in the winter. Always make sure you offer peanuts in a feeder as whole peanuts can cause little birds to choke!

The blue tit breeds from April to August, and will happily use your nesting box if you provide one. Their eggs are white with a splattering of spots, and incubate for around 13 to 16 days. After incubation, the brand new blue tits will wait for around 16-22 days, and then fledge. Unlike the more proliferate breeder, you can expect just the one brood from blue tits each season.

The blue tit has been known to peck holes in the top of milk bottles. So milkmen beware!

The coal tit in particular is a close relative, but has a bright white patch on the nape; an easy way to differentiate the two.

Perfect for the Blue Tit...