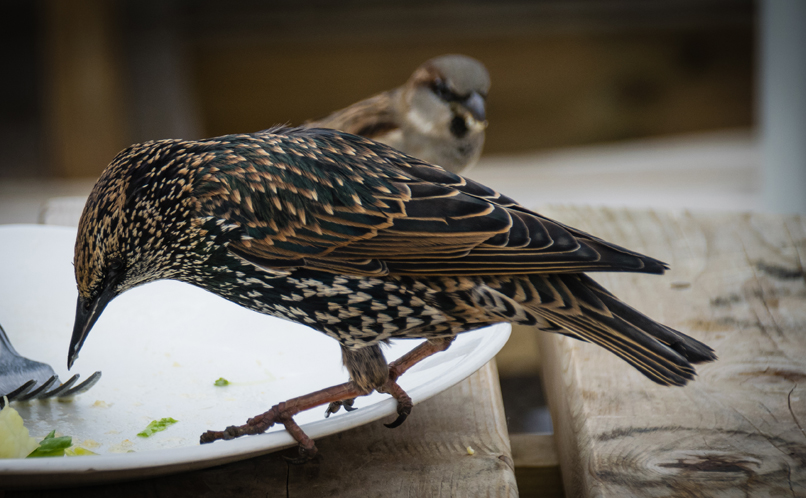 Starling numbers are holding in the UK, but elsewhere, there has been a sharp decline. This regular garden visitor is smaller than a blackbird and can be spotted walking or running on lawns, where they like to feed.

Mainly dark, with a sharp yellow pointed bill, this medium sized bird had a spotted plumage. The head and underparts are a blue-black shade. In the summer this turns into a purple sheen. In the spring, males appear brighter and less spotted than females, and also adopt a purple sheen.

Expect a wide variety of calls such as clicks, whistles and wheezy interludes. Mimicry can make the song of the starling hard to pin down.

Like song thrushes, will feed on a variety of insects taken from soil, but will happily take all manner of food provided by humans.

The male is, shall we say, a busy chap. In each breeding season, the male will have up to five different female breeding partners. This polygamous activity goes hand in hand with the laying of 4-7 pale blue eggs, which incubate for 12-15 days. Young fledge after 20-22 days.

The starling is a well known mimic, and has been known to even copy the sounds of car alarms

Causing some confusion is the juvenile starling. Paler, with a dark bill and variable amount of spotting, they look more like a small, female blackbird than their parents.

Perfect for the Starling...