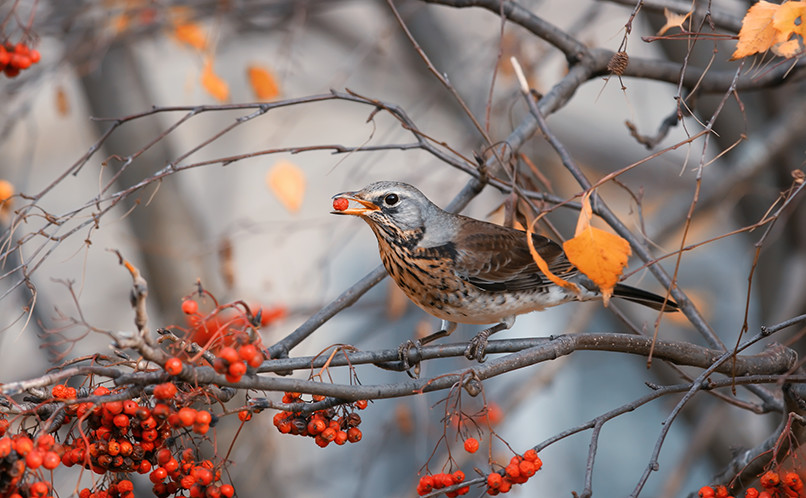 This large and colourful bird is a member of the thrush family. A winter visitor here in the UK, fieldfares can be spotted from September/October until around April time, foraging in large flocks for food in fields and parks. They are very gregarious birds, and can be spotted in large flocks with its cousin the redwing, mistle thrush, and even blackbirds.

A fieldfare is recognisable from its gre head and rump, rust coloured back, yellowish throat, and spotted breast. They also have a short, thin bill with a yellow base and a dark tip. They're similar in size and shape to a mistle thrush.

The diet of a fieldfare mostly consists of berries, insects, and worms. If you don't have a berry bush in your garden, they can sometimes be enticed by pieces of fruit such as apples, or even a seed mix if food is scarce during the colder months.

A small number have been known to breed here in the UK, but the fieldfare is mostly a migratory bird; they tend to breed in their native areas of Scandanavia and Europe. Fieldfares nest in small colonies, and aggressively protect their nests from predators and so as to give them higher breeding success. The female makes the nest on her own, making it out of twigs, grasses, and other plant materials. Fieldfares usually raise two broods per season, with roughly 5 to 6 eggs in a brood.

No matter whether the fieldfares are roosting in trees, or foraging for food on the ground, the flock will always face the same way.

The fieldfare is often mistaken for its cousin the redwing, partially because when both thrushes migrate over to Britain, they can be found foraging for food together in large flocks. To tell the two apart, make sure to check for the fieldfare's grey colouring, and the tell-tale red flanks of the redwing. Fieldfares are also larger birds than the redwing.

Perfect for the Fieldfare...