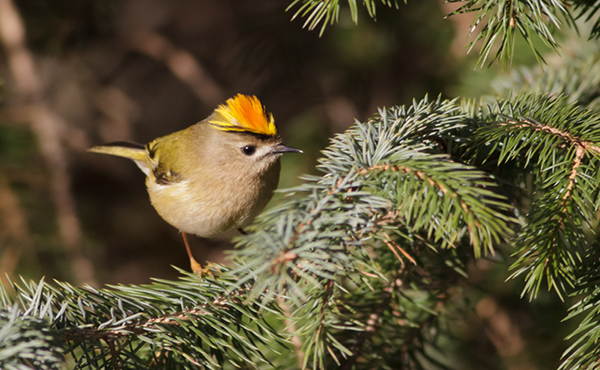 The Goldcrest is the UK's smallest bird, but what it lacks in size it definitely makes up for with its striking appearance.

Both males and females display their namesake crest, however males also have a bright orange centre to the yellow crest. A black stripe adorns either side of the crest, and the head is a green-grey colour with a pointed bill. The body is round in appearance, and green in colour with yellow underparts.

Goldcrests are ground feeders and love to eat insects and spiders. As autumn comes to an end and winter begins, they will come to bird tables for mealworms and smaller seeds.

Round nests constructed from spider webs, moss and lichen are delicately built in conifer trees. The female will lay a clutch of eggs around 6-8 strong, and fledglings leave the nest at around 18 days old.

A Goldcrest's wingspan is typically just 14cm, and they weight only 5 grams!

The Goldcrest has a cousin, the Firecrest, which is very similar in appearance. They can be told apart by being slightly duller in colour than a Firecrest, and they also do not have a black stripe across the eye.

Perfect for the Goldcrest...