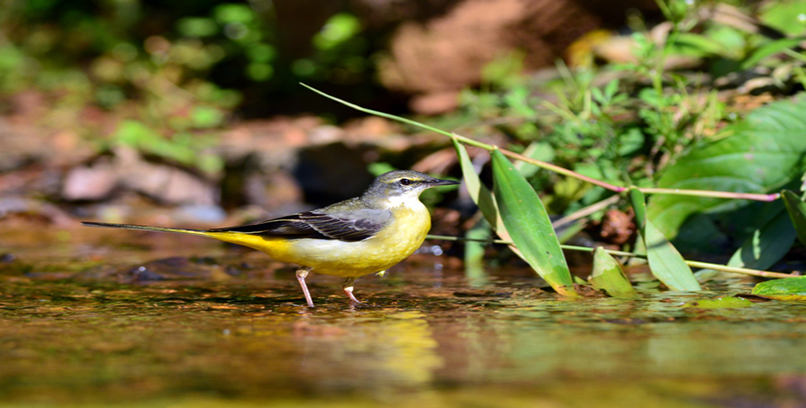 A chirpy little bird, grey wagtails got their name from their tendency to move their tails from left to right. Resident all year round in most parts of the UK, but partake in altitudinal migration, moving from northern to southern areas during winter.

The male Grey Wagtail has upperparts of grey with white eyebrows, black wings, yellow - green rump, black long tail with white edge. Its under parts are white with yellow under tail and a variable amount of yellow on the breast. In the summer the male has a prominent black bib. The female Grey Wagtail has less yellow on her under parts and no black bib.

Grey wagtails feed almost exclusively on aquatic insects and invertebrates throughout the summer, and a good way of drawing one into your garden is to have a pond for them to feed from. During winter, they are happy to snack on mealworms, suet and seeds.

The breeding season for grey wagtails begins in April, with nests being built near fast-flowing water. A normal clutch will contain between 3-6 eggs, which are incubated for around twelve days.

Grey wagtails are relatively rare birds with a population of just 38,000 breeding pairs in the UK. They are, subsequently, classified as Red Status due to this considerably low number.

Yellowhammers are similar in appearance to grey wagtails, however yellowhammers have darker legs and narrower wing bars.

Perfect for the Grey Wagtail...