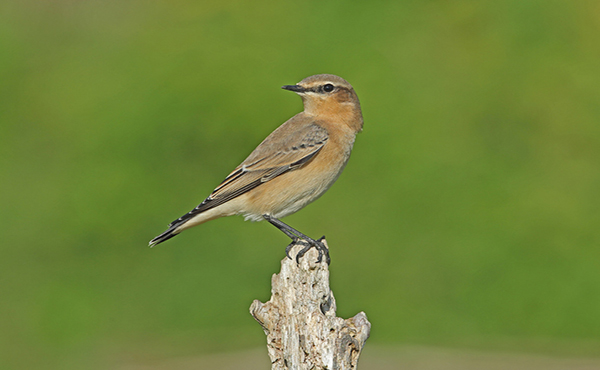 Mainly dwelling on the ground, the Wheatear can be found hopping or running along lawns during March in the UK. Passing through the Southern half of the country, it finally settles in the North in its breeding grounds.

Males have a striking pale blue back and an orange flush to the breast with black cheeks and wings. Males also have a black 'T' shape on their tail. Females are browner in colour, but still have the orange breast and 'T' mark on the tail.

Wheatears typically build their nest in a sheltered cavity between rocks, man-made holes or rabbit burrows. Eggs are laid in daily intervals during May until a clutch of 4-7 eggs are incubated for 13 days. Fledglings leave the nest at 15 days old.

The Wheatear makes one of the longest migratory journeys, averaging around 30,000km and crossing oceans, ice and deserts!

Nuthatches also have an orange chest and are of a similar blue colour, however the Wheatear is distinguishable by its black 'T' shape on the tail.

Perfect for the Wheatear...