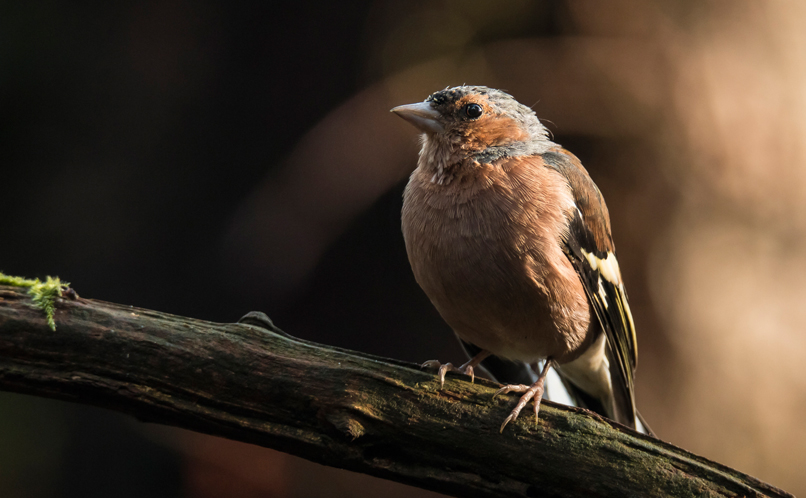 Striking! Pink underparts, a bluey-grey head and white wing patches make the male chaffinch one of the most distinctive small birds you’re likely to see. As is common, the female is similar, but more dull in hue. The brown back and dark wings offer further differentiation.

Various bird writers have described the song of the chaffinch as “like a fast bowler in cricket, running up to deliver.” The ever quickening notes that the chaffinch sing, ends with a flourish.

Like most birds, the chaffinch loves insects in the summer and spring. For the rest of the year, it will be happy to eat away at stores of seeds, berries and berry suet pellets. Often feeding on open lawns, it is a common visitor in rural gardens, but may shy away from more urban settings.

The chaffinch breeds from April to July and nests mainly in the forks of bushes or trees. Laying 3-5 pale blue eggs, which incubate for 11-13 days. The young then fledge after 12-15 days.

During the Victorian era, caged chaffinches were regularly part of singing contests. It was believed that through blinding the caged birds with a hot needle, you could get them to sing for longer.

The female chaffinch is often mistaken for a house sparrow. So if you aren’t sure, just wait until the bird begins to fly, and if their rump is a bright green, it’s most likely a chaffinch.

Perfect for the Chaffinch...