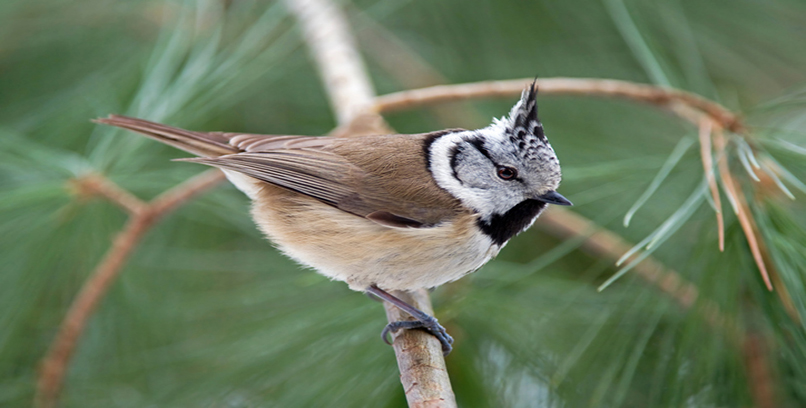 Although not as colourful as some other tits, what the crested tit lacks in colour is certainly makes for in style with its namesake black and white crest!

Male crested tits are identifiable by their upstanding black and white crest, and bridled face pattern. Females are similar in appearance, and only differ by having a shorter crest and narrower head stripes.

During breeding season, crested tits will feed on small insects and spiders, as well as worms and snails. During the colder months, they will peck away at seeds and berries.

Crested tits are monogamous birds, and one couple will raise several broods year after year. Building cup-shaped nests in tree holes excavated by woodpeckers, the female will lay 5-10 glossy eggs which the couple will take turns incubating for around two weeks.

The crested tit can only be found in the Caledonian pine forests of Scotland. Occasionally one may venture further south, but this is a rare occurrence.

Crested tits have similar markings to the coal tit, however they can be told apart by their distinctive, namesake head crest.

Perfect for the Crested Tit...