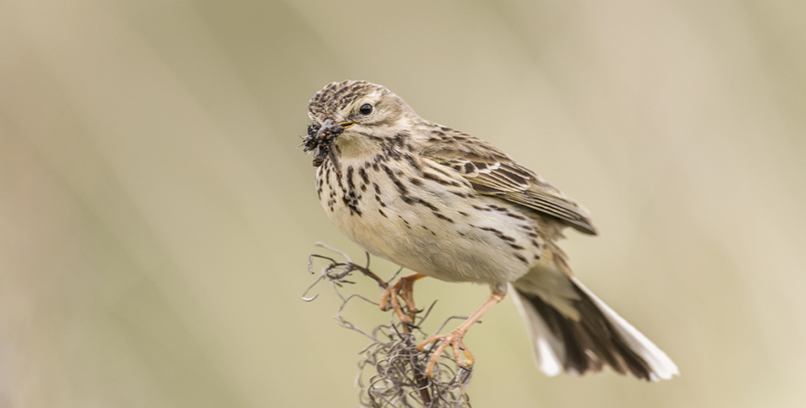 The most common songbird of moorland, heathland and rough grass, the meadow pipit is mainly resident in Britain, but some do choose to winter in Spain, Portugal and Northern Africa.

Males and females are alike, with darkly streaked olive-brown upperparts, pale grey undeparts and a spotted breast. Juveniles are a buff-pink colour, and lack dark streaks.

During the summer months, meadow pipits are skilled hunters that feast on flies, spiders and beetles. However, during autumn and winter, they have an appetite for seeds.

The female meadow pipits builds well concealed nests on the grounds of heaths, moors and marshes that is lined with fine grass and animal hair. The eggs are only incubated by the female, however the young are fed by both parents.

On moorlands, meadow pipits are the most common 'foster parents' of young cuckoos. Sadly this has seen the meadow pipit's numbers steadily decline since the 1970s.

The meadow pipit looks quite a lot like a song thrush, however it is much smaller is size and is only slightly larger than great tit.

Perfect for the Meadow Pipit...