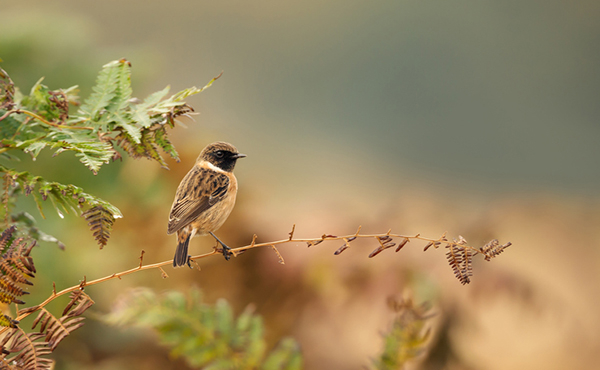 A couple of very cold winters a few years ago meant the stonechat was in a bit of trouble. But successive milder winters have seen this perky little bird bounce back!

Males have striking black heads with white markings around the side of their neck, orange-red breasts and a brown back. The female lacks the black head, but still has an orange tinge to the chest.

The stonechat has a penchant for snacking on seeds, fruits and insects and will often visit bird tables to feast on their favourite foods.

Breeding in a variety of habitats, stonechats begin to breed quite early in the year with eggs often laid by March. Most pairs will raise a two broods in a year, with an average of 5 chicks per broods.

Stonechats are name for their call, which is said to sound similar to pebbles being clicked together.

The stonechat is similar to the whinchat, but is generally darker in appearance and looks less slender.

Perfect for the Stonechat...