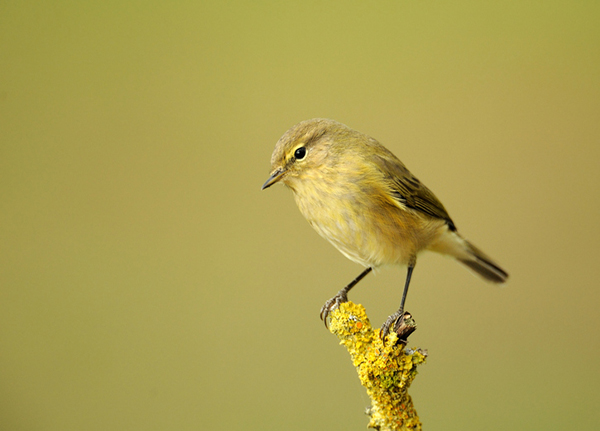 This cheerful little warbler starts to arrive in the UK around February / March and departs again in October. Some have been known to over-winter in South of the country, however they are predominately summer visitors.

Similar in size to a Blue Tit, Chiffchaffs are identifiable by olive green upperparts and tail, and pale-grey underparts. A thin dark eyestripe with yellow edging is a distinguishing feature.

Chiffchaffs feed on insects such as midges, caterpillars and moths which they find by foraging in tree canopies and among bushes.

The male Chiffchaff returns to its breeding territory around three weeks before the female, and immediately starts singing in order to establish ownership and attract a female. Once he has found his partner, the male uses a slow butterfly-like flight as part of the courtship ritual and, once a pair-bond has been established, other females will be driven from the territory. Nesting in concealed sites, the female will lay a clutch of around 5-6 eggs which incubates for two weeks before hatching.

The Chiffchaff gets its name from the sound of its song - a very obvious run of notes of 'chiff-chaff-chiff-chaff' repeated many times.

The Willow Warbler is very similar in appearance, however the easiest way to differentiate between the two is by their song. The Chiffchaff also has shorter wings than the Willow Warbler, and appears stocky in direct comparison.

Perfect for the Chiffchaff...